Last monthly update was in February… Ouch. So many things happened during the last 10 months… Time flies.
But first, the good news:
The SHMUP Creator is feature complete!
It means that every features are there and that we can begin the last part of the journey: completing the SHMUP Creator and at last release it to the public. We are not there yet, but we can see the light :)

NEW FEATURES INCLUDE:
. a scroll bar in the bottom of the screen to navigate quickly in a level
. I wrote about the 3D snap in the last update: it is complete and it works. Yeah!
. users can import FBX 3d models directly
. there are in-editor tutorials now. “Prof Bulo” will teach you the basics of using the SHMUP Creator
. the tool is translation ready. We plan to release it in English and French first. 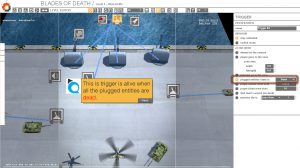 IMPROVED FEATURES:
. the builds of the games are now more compact
. there are tons of small UI improvements: animated transitions, new keyboard shortcuts, contextual help…
. dozen of bugs are now gone. (dozen of bugs are still lurking, but I’m watching them)
. did some more work on scoring systems and medals
. a new and faster bullets engine (read the last post for more)

WHAT WE ARE DOING RIGHT NOW:
. I’m working on the documentation. It’s taking shape but it takes a long time.
. we are still working on the UI: the menu editor and the HUD editor are still a mess and need a lot of work.
. I’m still unhappy with some parts of the tool: the weapon system is too complex and need some work. We can’t release a beta until we can have time to address that. 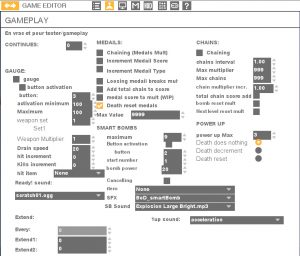 WHAT I WOULD LIKE TO DO but HAVE NO TIME right now:
. we still need to make a 2D level to test the tool and to include in the package
. some assets are still missing: I’d like to include more bullets types, more enemy moves presets…
. we need to do more marketing. Like not posting an update every 10 months (…).
. we need to translate the SHMUP Creator and the documentation in French