. Fears
We can say there was 3 phases in the relation between men and computers. Fear and incomprehension, this is my parents generation which has seen the birth of computer science from a distance, like a mysterious thing, complicated and not for them. Today’s generations are born with it, and therefore computers are a natural thing, like tv or clouds. In between, my generation (to be honest I’m born in 1975) which hasn’t been afraid of computers, and instead felt an intense curiosity about them. We must say we soon realized that we could play with it ! 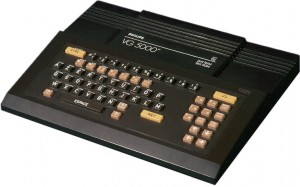 . My first VG5000
One day, after months of harassment on my parents, my father took me in a hangar near the Seine’s shores at Paris. A very creepy place, full of appliance boxes on sale. There, a man in a blue blouse sold us for next to nothing a Philips VG 5000. Joy ! It must be said that at the time, each brand of Hi-Fi, household appliances, electronics, marketed his own machine, obviously incompatible with the competitor ones. In a word, it was a real mess. In addition, the french machines were manufactured in France and the US machines in USA ! By adults with a real salary ! What a strange time… 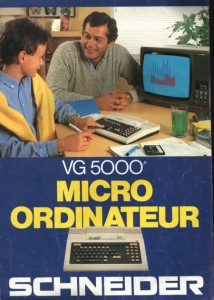 . Philips
Philips tried the adventure, without success, and the rest is literature. The unsold into boxes and a box at home.
Incredible specs : 16 Kb of memory ! (16, like 16 Kb, not 16 Mb, nor 16 Gb) 8 colors ! A resolution of 320×250 ! (I see someone laughing in the back. Out !).
Well yes, even then that wasn’t brilliant.
In addition to the central unit and his extension of 16 Kb of extra memory, the noble merchant offered me a game on tape, US-rally.

Today, watching this video and a moment after the Forza 5 trailer allows us to appreciate the quality gap made from 1984 to 2013 and the limits of the “That was better before”. 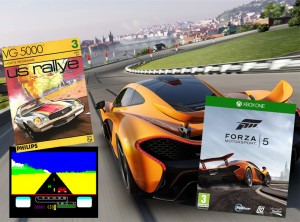 . Less is more
Aside this masterpiece, I had only a welcome blue screen while booting at hand, and the minimalist basic language from Microsoft. So what ? Go outside and play in the woods, build a tree-house or learn violin ? No ! Let’s learn to code, at 11 years old it passes time ! Armed with an obscure manual and some of the late Hebdogiciel Magazine, here am I, writing tiny programs, then some little RPG with syntax analyzer, some little animations with redefined characters… Nothing concrete, but there is move on screen, and it is a real initiation at programing, which will be useful for later.
Maybe a future job, who knows ?