Despite the virus situation, we managed to make good progress on the SHMUP Creator.

STEAM
First of all, we are now an official Steam developer!
This is a really great milestone for us. We are in the process of integrating the Steam DRM and uploading the game on Valve’s server for the first time. We still have work to do on the store and the library, but it means we are going to be able to start the closed beta in a few weeks! 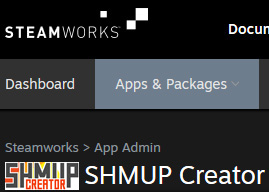 UNICODE
Until now the SHMUP Creator wasn’t working on OS using foreign characters: for instance, on a Japanese Windows, the tool crashed. We are in the process of modifying some of the tool code to allow the import of assets on foreign systems. It also means modifying external libraries, like the one responsible for the FBX 3D models import.

LIBRARIES
Speaking of which, we updated all the libraries we are using (Ogre3D, MyGUI etc.) to their latest version.

NEXT
It’s still difficult for us to find enough time to work on this project, and it’s more difficult than ever right now, but we are quite excited: the beta is really almost ready!
Also, we are working slowly on the SHMUP Creator store on Steam. It means working on a trailer and such.
Still so many things to do…