Blades Of Death is the SHMUP Creator 3D sample level. It was the first real level made with the SHMUP Creator (it was playable at the STUNFEST game festival a few years ago) and was really a cornerstone of the SC development: working on a real game level helped us debugging and polishing a lot of things, and making the level was fast and fun.
Actually, it was quite a relief: it’s one thing to work on a tool, trying to imagine what features are needed, how to implement them the best we can, working on usability and design, but it’s another thing to really use it, like a future user, and really creating something with it. And… It worked!

The level shows the 3D features of the SHMUP Creator: lighting, shadows, materials… As well as a boss with several destructible parts and several weapons, some mid-boss, particle explosions, sound effects…
As always, everything is done in the editor without any coding: the bullet patterns, the enemies animations, the gameplay….

Shmup gamers will quickly notice that Under defeat is our main inspiration on this: I must say I loved this game. I know it’s a slow game and it is a little bit boring, but I like its mood a lot, and I love, I love the explosions :) 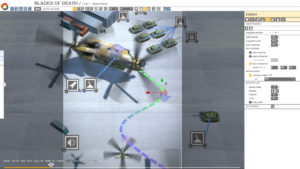 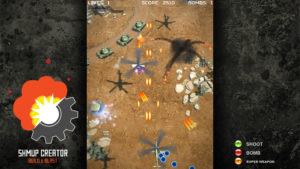