After being introduced to programming with my VG5000, I’d wanted to quickly acquire a more sophisticated machine. Then came an used Philips MSX. At the time, this computer was of the same quality than his direct challengers like the C64 or the Amstrad 464. One of its advantage was her Japanese conception allowing it to have a cartridge port transforming it into a decent game console. One of the most prolific game publisher on this machine was Konami which released future classics like Metal Gear Solid, Twin Bee, Castlevania, Gambare Goemon et Nemesis (aka Gradius outside of Japan).
And a saturday afternoon, I received as a gift a Nemesis 2 cartridge and after that my life was never the same. 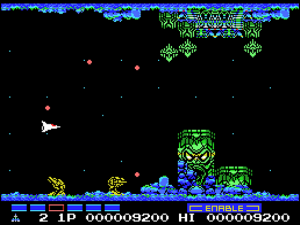 . SHOCK
To begin, the first thing that blow your mind when you start the game is the sound. The Nemesis 2 cartridge has a SCC chip which add five more sound channels to the MSX standard three. More technical informations here.
Listening to 8 tracks musics, composed by a real professional musician was a change from those usual 3 tracks melodies written by the accustomed amateur musician.
Next, the graphics, with huge animated flames, gigantic bosses, destructible backgrounds, which made your eyes cry (unless that cames from the 8 to 8 pixels scrolling. A good reason to later wear glasses…).

. SECRETS
And finally, the secrets : secret passages almost impossible to find, bonus weapons which, at this time, I’d never suspected the existence (I was young and without internet nor gamefaqs, huh), the famous Konami code cheats…
A big souvenir : when you fight a boss, you have to shoot him right in the belly to open a breach in his defenses and then, attack his core (the famous: “shoot the core”). Once dead, the boss stays inert for a few seconds then explode in a sheaf of yellow pixels. And I remember, unforgettable moment, the day where I said to myself “Certainly dumb, but why not try entering the breach, to see…”, and then, the screen disappeared, an unknown bonus level appeared, and I was filled with an enormous feeling of joy, and wonder was glowing in my kiddy eyes.
In truth a good Wednesday afternoon.
And of course, I pass on the game secrets and modifications if you insert another Konami game in the second MSX cartridge port, like playing as Penguin if you put Penguin Adventure or a lot of cheats with Q-Bert.
What a nice time of free secrets, that was before the free2play era my good lady.

. FIRST CONTACT with the GAME DESIGN
I also remember a small detail which struck me at this period: when the player’s spaceship approaches a gun turret too close, this one doesn’t shoot,fair play,to prevent death by an unseen or inescapable bullet. Then I had an epiphany: this game had been conceived by designers (even though I didn’t know this term), that is to say, people which worked hard on a product, thought about it and found solutions to numerous problems, took decisions to improve and make the game pleasant. This was later called game design, or game-play.
I also felt a real difference with usual lousy half games which I was used to. There it was a super production, a team job and a professional one. This was quite the same feelings I had, at the time, playing Super Mario Bros on NES (Well stronger for Mario but this is incomparable).
This is the difference between sophistication and a makeshift job.